Day Four: 31st March. Where are they now?

Whatever happened to your __________?
Write about the fate of a past knitting project. Whether it be something that you crocheted or knitted for yourself or to give to another person. An item that lives with you or something which you sent off to charity.

I’m woefully late hopping on this Knit/Crochet Blog Week bandwagon. I kept meaning to do posts, and kept forgetting to do them. I’m going to go ahead and post them as I remember to do them even though the days have passed already. 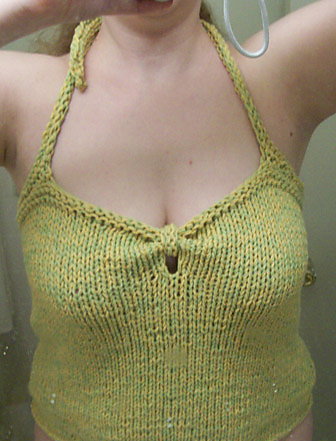 I suppose I shall have to write about the halter top and boy shorts that I knitted in 2008 (Gracefully Gathered Halter Top and Boy Short by Joan McGowan-Michael). At least, I think I knit them in March 2008. That seems a bit too early in my knitting career for me to have taken it on, but considering that my first pair of socks were beaded mystery socks, and my first shawl was charted with odd sections that luckily other users had noted, it wouldn’t be odd if I HAD decided I was ready to knit a pair of pajamas after I had done a few dishcloths. I think it’s rather more likely I did it in 2009, though.

Anyway, I’ve digressed. If you’d like to know what happened to these pajamas, you might be sad to discover that I’ve stuffed them into a clothing donation box. I lost so much weight that they simply didn’t fit anymore, especially when they were already big to begin with.

I think it’s important to go back and note what one did wrong on previous projects so they don’t screw up when they try again.

This pattern originally called for a cotton that is marked as a bulky weight, so I had substituted two strands of Lion Brand Cotton-Ease. I realized it was coming out huge pretty quickly, but even after ripping and going down a needle size or two, it STILL came out huge! Thus I learned the importance of swatching. 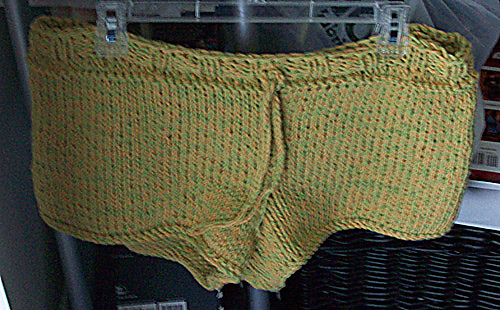 These were not flattering on me at all.

I had to end the top sooner than the pattern called for because of the huge-ocity of the project, so it made the top look awkward. I had to do a few rounds of crochet around the edges to bring things in a bit, too.

I didn’t do so badly with the boyshorts, since I did them after tackling the monstrosity of a halter top. I had a few problems with the seaming, and since my butt and thighs aren’t exactly petite, I had to add more short rows and also add on a waistband to the top of the piece for a drawstring to help hold things in place.

So now that I’ve gone from a 16 to a 12, you can see why there’s no way these pajamas would fit me anymore. I figured maybe SOMEONE will be able to wear them and stuck them in the donation box. I hope they find a home.