I still have a backlog of projects to put up, and some smaller things, but since I don’t post works in progress often and I have two bigger projects going on, I think now is a good time to show you that I’m not just farting around while my blog is sitting here stagnant. 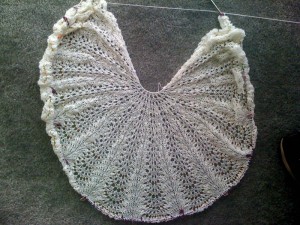 First up is the wedding veil. The pattern is based off of a peacock doily pattern and is is called Snow Peacock. The pattern is not very symmetrical and is uncharted. Luckily for me, the fabulous Yoel has posted up the chart she made, including bead placement. I’ve been using this instead of the written pattern and just changing the beads. 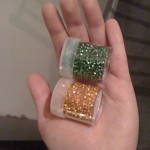 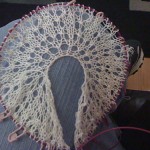 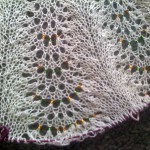 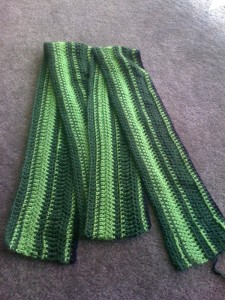 The other project I’m working on when I don’t want to bring the veil somewhere because I’m on a bead row or it isn’t a very clean place for white lace is a Piranha Plant Scarf.

There is apparently a pattern for it, but the creator wants you to email her for it and frankly I can’t be bothered when it’s a simple matter of looking at a pipe from Super Mario Brothers and just crocheting it in strips. It will be harder to make the plant, but I’m confident I can pull it off. I’ll be working the pipe openings separately and sewing them on, and then I’ll do the plant part.

I’m using the sprite from Super Mario Bros. 3 instead of the original Mario Bros. plant like the existing pattern does.