I got a lot done since last Wednesday, but there isn’t much to say. Two shawls are off the needles. One is already blocked and is on schedule for Final Object Friday, but I am including the unblocked picture here since a few other people participating in WIPW are making it also: the mystery shawlette. 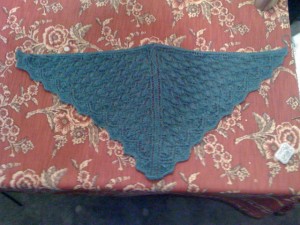 Chianti is also off the needles. I’ll be detailing that more when I put up the FO post. I’m not sure if it will be next Friday or on some other in between day when I feel like posting. It isn’t blocked yet, and I’m not sure when I’ll be doing it. 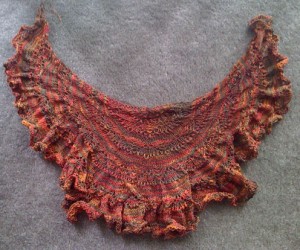 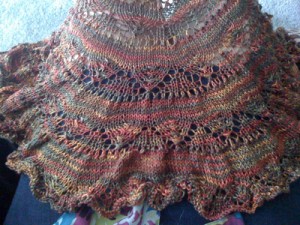 Todd asked me today if “I’m ever going to use that yarn over there” and pointed to where my stash is, and he looked skeptical when I told him both of my shawls this week were from that stash. So I broke out the new size P crochet hook, dug through my stash, and started a kitty bed.

So far it’s taken up 2 skeins of fun fur and most of a third, almost 2 skeins of jiffy, and a slew of mystery acrylic in orange, white, and black. I’d have finished it in a day, but I am doing more repeats on the edging than the pattern calls for so I can fold down the sides for a sturdier bed (and also to use more yarn). 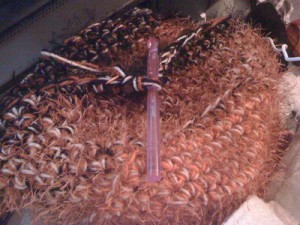 Work in Progress Wednesday is brought to you by Tami’s Amis and Other Creations.