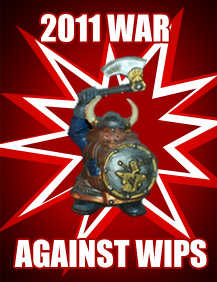 Yes. Yes I DID take a picture of my own painted Warhammer figure and make my own war banner. Why? Because I’m not fighting this war as an orc, darnit!

I had to photoshop in my dwarf’s eyes because I never painted them, but just look at that ax, pickin’ up the slack and making up for his overall drunken appearance. It’s such a nice piece of ax. =D

So, you may ask, did I actually win any skirmishes this week? The answer is yes.

I managed to track down the book I used for this project. I actually think this isn’t the original one I used. I think I gave that one to someone because I had a second book containing the exact same pattern but using different colors and published under a new name. Crazy. 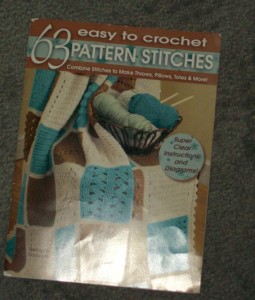 The original touted that the blocks were for an heirloom afghan. No mention of heirlooms in this book.

All of my blocks are thankfully well labeled and I had 47 done, and 48 was started. There will be 63 in all as you can see by the book cover. I tried to take pictures of them laid out, but one of the sets apparently didn’t register on the camera, so all you get is how much yarn I have left, plus the partially-started block.  The below picture is pretty true to color.  The one after it is definitely not. Stupid flash.

I’m going try to take this week to pin them all out and take individual pictures of them and try to make a virtual afghan. The blocks aren’t actually placed in order when the blanket’s assembled, which is why none of the blocks are sewn together yet.

Oh, yes, I did finish block #48. That leaves 15 blocks left with 21 Thursdays left in the year, which leaves time for putting it all together and edging. I can do this thing.