The yarn I ordered for an eventual sweater for Todd came in! I ordered it from someone’s Ravelry stash. I’m going to weigh the two wound skeins to confirm how much is there later. 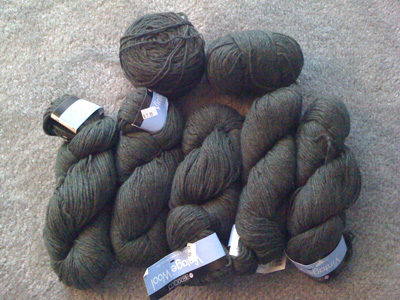 Because Todd does all his own laundry, and also because I’m lazy even when I do my own laundry, I wanted the yarn for his someday-sweater to be easy-care. He said he is only going to wear it around the house when it’s cold, so there’s no reason to get him a fancy yarn, anyway.

The sweater is the Raglan Sleeved Henly from the book Knits Men Want, which actually does have knits men want as well as rules to follow when knitting for men. The book is written by a man who, I think, has a male partner that he knits for, so that must be why Todd actually wants a sweater from there.

I am probably going to modify the sweater so there is some ribbing along the hems of the sleeves and sweater body because I don’t like the way it drapes using yarns that aren’t the recommended Llama Silk, and Todd has approved this modification mainly because I don’t think he cares. =D

What did you squee about this week?