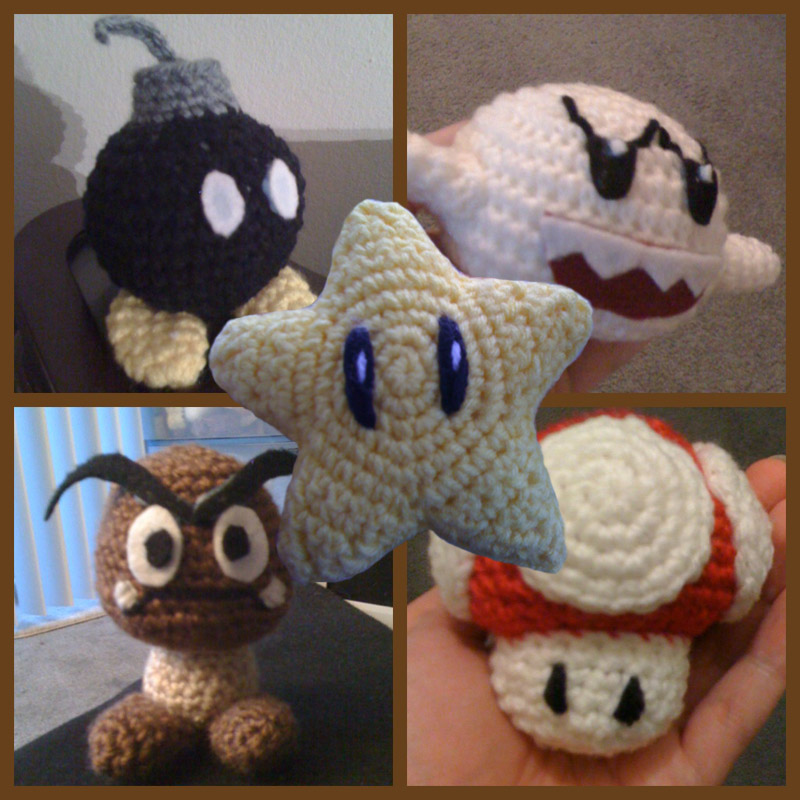 I made this set for a little boy about to go through chemotherapy for someone in my knitting group. She asked us all if we could make hats or toys for him, and since I figured he’d be getting lots of hats I decided to make some toys. Nintendo isn’t terribly original – once they create a character, they proceed to use that character over and over and over again. If this boy has a Gamecube or a Wii and has played ANY Mario game whatsoever, he’ll surely recognize these characters! 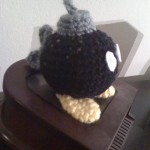 Somebody set us up the bomb!

Bob-omb came first out of the set. I changed his “stem” so that I wouldn’t have to sew on the top. I basically did FPSCs around each stitch, and then did my decreases from there, and it made the stitches point inwards. then I left a long tail and just did a chain for his fuse right from the center instead of doing a separate chain and a row of SCs and then attaching. Much neater, I think. He doesn’t quite stand up right on his own. Next time I’ll put a bit of weight in there or something.

Who you gonna call?

Next was Boo. I didn’t want to do a King Boo because I didn’t feel like doing all the jewels on the crown. Also, the pattern for King Boo was HUGE and not to scale to the other toys at all. To make Boo a bit smaller, I followed the pattern to round 6 (48 stitches), and then just worked in the round for 4 rows before doing the decreases.  I recommend doing more rows for more face room and a rounder shape.  For the arms and tail, I finished off at round 5. 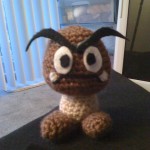 Those are some wicked eyebrows.

Goomba was next. As with all my toys, rather than use the faces the pattern writers used, I looked up the character and copied from the original source. No point in degrading quality more than necessary! Next time I will move his mouth lower and possibly make the eyes and brows a bit smaller. I think they look like they’re meant for a bigger head.  He mostly stands up on his own if you push him forward a bit.

Star with eyes. Easiest. Character. Ever.

When I told my gamer friends I was making the Mario Invincibility Star, they were all like, “You mean Starman?” Apparently that’s its official name. I think it’s ridiculous as it doesn’t look anything like a man. As far as I’m concerned, the only proper Starman is in Earthbound.

Anyway, I did Starman as a spiral instead of the odd back and forth method the pattern writer used.  I also tried to make the eyes more true to the original. He came out a lot bigger than the others, but I think he’s still alright to send off for the having of fun times. 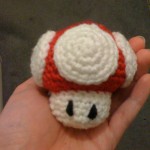 Pattern: Yet Another Mario Mushroom Pattern by Ami Amour

I feel bad that I don’t have much to say about the mushroom. It’s a mushroom, and it’s only red because I didn’t have a good green to use. I guess my gauge was really tight on the red, because the white circles are huge. Now I know to make them smaller next time.