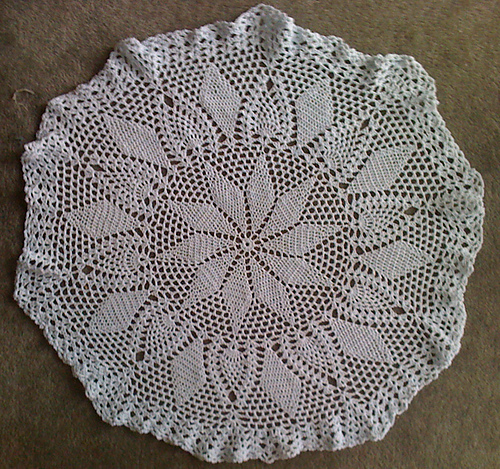 With a ruffled edge, it just wouldn't lie flat.

I have a huge backlog of stuff to post, all made between October and January, so let’s start with this here baby blanket, shall we?

This is the second blanket I made from the book Leisure Arts #4623, Circular Baby Afghans. Despite the fact that I went up a hook size, I didn’t anywhere NEAR the yardage that the pattern said this blanket would take.  After weighing in the resulting yarn cake, it turns out I only used about 750 yards instead of closer to the 1000 it was supposed to take.

I guess it’s possible I used a smaller hook and marked it down wrong, or that using a dk weight somehow made it take less yardage even though I used a hook meant for worsted weight yarn.

This was gifted to my friend Jenni shortly after she had her second babeh.  She sent pictures of him back swaddled in it, so I suppose it’s big enough even though it isn’t as big as I wanted!