I decided to join in the trend of putting up Work in Progress posts on Wednesdays. That will keep give me enough time to actually make progress on things and keep the posts from getting spammy, but aren’t too far apart that you’re left wondering what I’m doing.

You won’t be getting a picture of the veil today. I missed the transition between the pattern being every other row to being on every 4th row, so I have to tink back to the beginning of the row I’m on (thankfully only a couple pattern repeats) and do the proper row.  It’s just a pain because of the beads.

I haven’t gotten much further on the Strangling Vines scarf either, but I have to head in to Philly to watch my cousin graduate from Temple Law tomorrow, so I expect to get a chunk of that done while on public transportation.

Don’t despair, though!  You DO get a picture today!  I cast on another shawl even though I really don’t have time to do another shawl, hahaha!  It’s Wendy D. Johnson’s Summer Mystery Shawlette and I have made my excuses thusly: 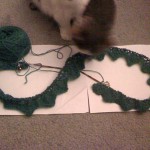 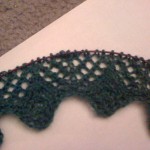 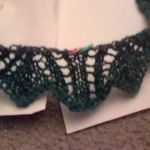 I’m doing this in Knit Picks Palette, in Tidepool Heather. It isn’t a color I’d normally get for myself. I wonder if I got it on sale or something?

I cast on with size 7 needles, and switched to 5s for the actual knitting.  This is my first time using the lace cast on (scroll down to see it).  It’s almost exactly the same as a knitted cast on except you don’t twist the stitch before putting it on the needle.   It makes it look like the stitches are on the needle wrong, but once you knit across you’re left with a stretchy lacy edge instead of a stiffer sort of crocheted edge.

I’ve finished clue 1, which is 12 rows. It already feels like it’s going by quicker with every row. I can’t wait for the next clue, which is on Sunday!

Work In Progress Wednesday is brought to you by Tami’s Amis and Other Creations.

Edit: Here’s a better shot of the yarn. I took this picture in the sunlight and it’s much more true to color than the one I took in my cave-bedroom. -_- 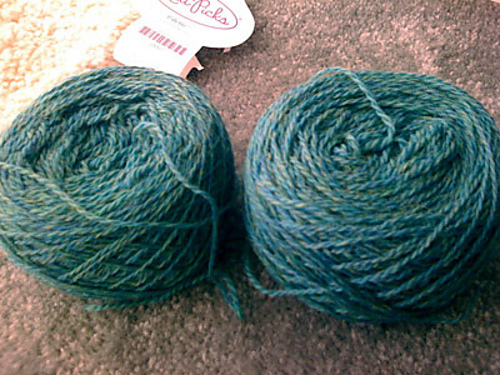