Is there anything more squee-worthy than kitties playing with handmade catnip toys? I didn’t think so!

My friend from college, Jeremy Rodden, has written and self-published his first book, Toonopolis: Gemini (usually $.99, but currently free for a sale). The idea for it started as an internet roleplaying game in which the players created cartoon characters that then “fought” against one another. Jeremy’s character Kid Gemini and his manager, Jimbob the Talking Eggplant, basically existed to lose and/or get picked on.

So I made him into a catnip toy, modified a bit from Lion Brand’s pattern. 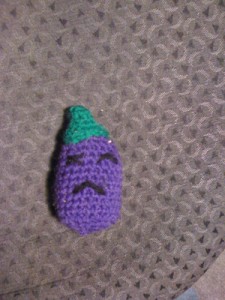 Well, first I made his new character, a rainbow-wearing gnome named Roy G Biv, into a catnip toy for his kitties.  He’s made from the pattern Bev’s Top Down Gnome by Beverly A. Qualheim. 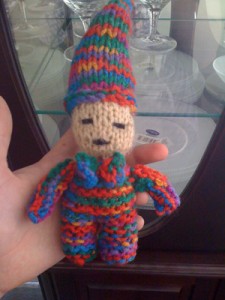 But after MY kitty stole Roy off of my desk in the middle of the night and gnawed on him, I decided to make a Jimbob for her so I could laugh as she chewed on it. And then I made one for Jeremy’s cats, too.

Buckle up for: WHEN NIPPED CATS ATTACK! 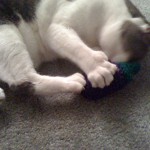 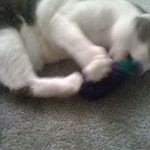 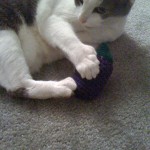 What? I’m busy over here! 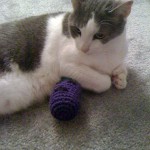 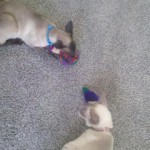 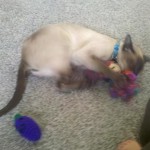