I stopped in at Joann’s to pick up stuff to finish my purse with, as well as a couple other things I’d been meaning to get.

But you can see the really awesome purse handles I got. 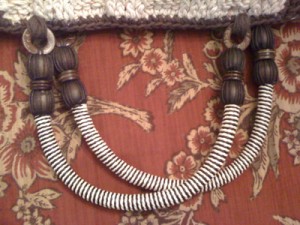 I also got a pair of giant size 19 knitting needles for $2, and a hairpin lace loom that I’ve been wanting for a few months now. 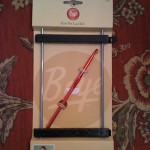 And lastly, at the party I was just at, one of my friends gave me a scarf she was having problems frogging (it kept getting stuck) and said since there wasn’t enough yarn for a scarf as long as she wanted it, I could have it. I tried frogging from the other end, so now it is all unraveled! 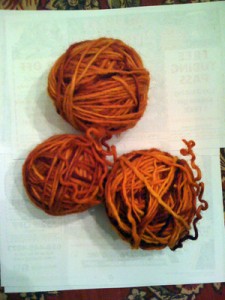 Such a lovely orange, too.

It seems to be a mystery wool or some sort of wool blend by the way it sticks to itself. It sort of feels the same way Knit Picks Palette does and isn’t particularly soft. But it’s pretty. It’s only in 3 balls because I decided to break the yarn where the knots were. My friend had just hid them within the scarf but I will try a Russian join if the spit-splicing doesn’t work. No idea what I will make with it.