Yesterday was the bridal shower my awesome bridesmaids set up for me! It was a fantastic time. The pictures haven’t been uploaded anywhere yet, but here is a shot of my new keurig and pod storage, already in place in the kitchen! 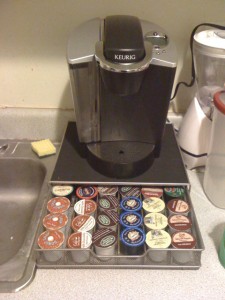 We also received two Ott Lites, a set of gorgeous toasting glasses, a gift card to Target, an immersion blender, and some stuff I’m forgetting because I’m too lazy to get the list in the living room. :) We also got to keep one of tea-serving-trays, and a teacup and saucer set (the latter was the party favor and everyone got one!).

Also, one friend gave me a KnitPicks gift card, so I have a couple skeins of Swish Bulky on the way, which is one of their more costly yarns and not one I’d get without a gift card. Also, a small book of crocheted aran pillows, which might someday benefit Todd since I thought it a bit unfair that he doesn’t get anything out of a KnitPicks gift card. :)

What did you squee about this week?