Adelei is off the needles! Here is a pic of what part of it looks like unblocked. 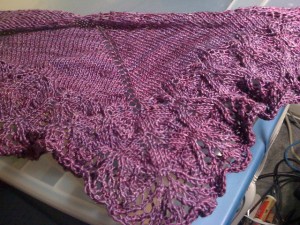 And since so many other people got fingerless mitts this year, but I haven’t gotten any, I’m stashbusting by using some Moda Dea Sassy Stripes I had sitting around. Both skeins are the colorway “Stormy” but have different dye lots. 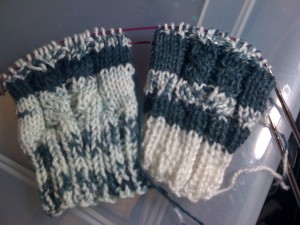 I have some new OttLites now from my bridal shower, so colors are coming up nicely even though it’s dark right now and my phone camera is meh. I set up the desk lamp in the bedroom so I could see what I’m doing while knitting at the computer, and took these pics with the light shining right on it. The mitts in particular look very different. In normal light, they look more green than the gray the OttLite reveals it to be.