Let’s get the easy stuff out of the way first!

Now let’s get to what you’re here for: PICTURES!

I made and completed my first baby sweater, but this is WIP Wednesday so you get the WIP pictures.  The pattern is 5 Hour Baby Sweater. It took me more than 5 hours but much less than 12 hours.  That’s all I really know. :)

I thought I would be clever and knit the arms in the round, but then I realized this was a mistake because I got huge armpit holes that just wouldn’t quit even with some k2tog action. 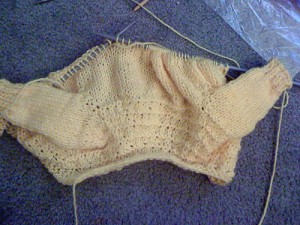 Almost but not quite done. 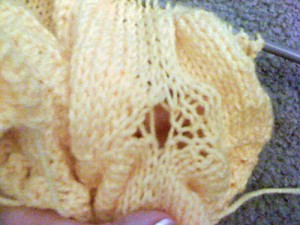 Crystal Palace Yarns is holding a KAL for their Sausalito Scarf and their Jasmine Lace Scarf, and you can enter it in their Ravelry forum. You only get put in the prize drawing if you use CPY products.

I wasn’t going to enter because I only had panda silk that wouldn’t really suit either scarf, and after mentioning this in the forum a little yarn fairy sent me a couple balls of mini mochi! So I decided to knit Sausalito due to it’s lack of FOs, and I am calling it my Mochilito Scarf. 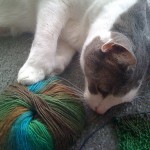 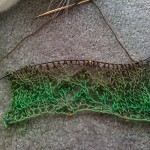 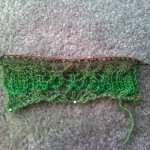 It looked like mess on the 7s as you can see. It’s amazing what changes one size down will wrought on a project. It looks so much better now! I think it may also be that the Knit Picks needles I changed to are more comfy in my hands.

Also of note is that Dijjit likes this yarn. Normally, she is indifferent to yarn at best. Usually she goes right for my knitting needles, even if they are the straights or dpns. She’s wacky.

If you’re achin’ for more Works in Progress, go over To Tami’s Ami’s WIP Wednesday post for more!