I had progress on War Against WIPs that I’ll detail tomorrow, and I finally blocked the Strangling Vines Scarf, which should feature on FO Friday next week.

Aeolian had been put on hold for a while because my size 14 crochet hook I was using for beading broke. That’s my second one. This time it fell off my desk and landed hook first in the carpet, which was enough to break it’s flimsy flimsiness. I get all my awesome beads and tiny crochet hooks at Beadwranglers (www.7beads.com) for the cheaps, and they have super fast shipping. I’ll be doing business with them for a long time.

Anyway, row 18 of the shortened edging chart has been completed which leaves 16 rows of that chart left. I seem to have a lot of yarn left, but who knows if it would have been enough for the full edging? maybe a more if it will get sucked up in the end than I thought. 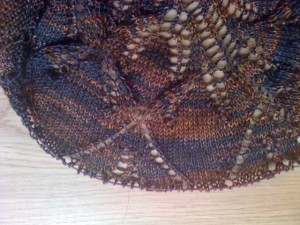 I took this picture earlier in the night Tuesday of the Pixie Shoulderette. By the end of knitting group I got much further down the sleeve. I have about 26 rows left before binding off and finishing, and I am now into the second ball of yarn. 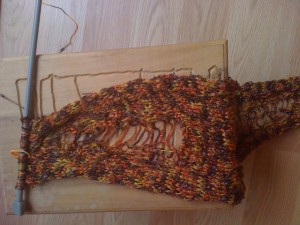 Where the holes start is where the shoulder goes.

And last but not least, Mochilito has been bound off. It isn’t blocked yet so it doesn’t count as done in my book! I have FOs for this and next week already, so you may not get an official FO post for this until the 26th unless I stick it up for a Squee Sunday. 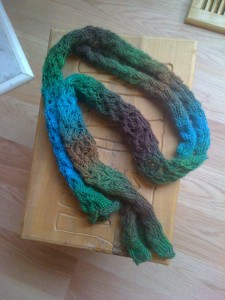