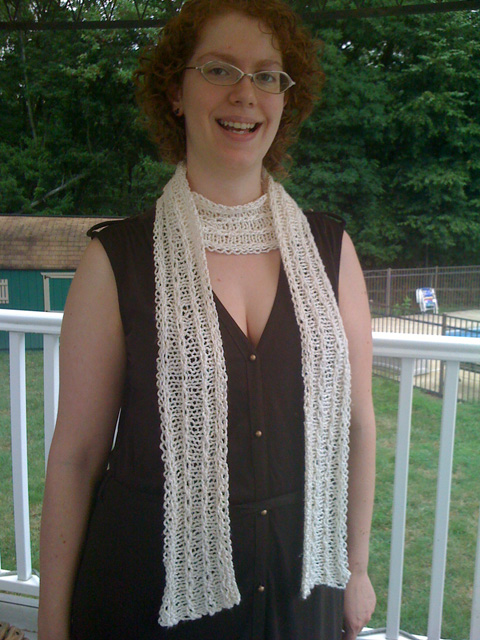 My camera when off when I was asking if my camera was working. ::sigh::

I knit this scarf as a going away present for my co-worker’s last day with us. She also has the first lace scarf I ever made, which I maintain is just “meh”, but she always says how much she likes the colors. Still, I wanted her to have something better now that I have more skill. 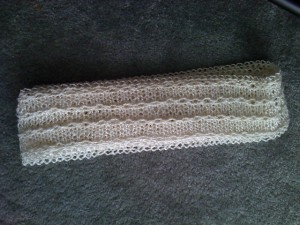 I think that even if I had size 10 needles as called for I wouldn’t have gotten in the 5th stripe. I am dubious to the inference that the scarf in the picture on the pattern was made with only the two balls of yarn called for.

Bernat Bamboo Natural Blends is a very soft yarn and feels wonderful to work with. However it sheds everywhere until you wash it, so be prepared to pick fuzzies off your clothes or just use one of the animal hair tape rollers to get it off you.

I would definitely like to make this scarf again. It only took a weekend to pump one out and I think it’d be a great gift scarf. It blocked to over 5 feet with the called-for 171 stitches cast on, which is plenty for a decorative scarf. It could be easily lengthened with multiples of two in the cast on, and widened by just knitting past where I stopped.