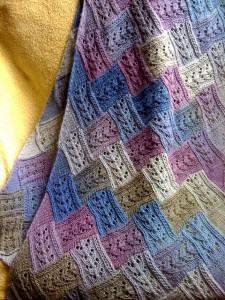 If you don't think this Birch shawl is gorgeous, I think you're poopy.

When I saw this topic, I had to think about it for a little bit. There isn’t really a single pattern writer or yarn-dyer that I admire so much that I’d say they were my raveling hero. I don’t aspire to be like most of them. Sure, there are a few amigurumi pattern writers that are awesome and I wish I could write patterns like them, but that just didn’t seem like enough.

And then, it hit me: who makes the most projects that I wish I had the skill and attention span to make? Of course it is Colleen from my knitting group! Also known as Sit-Stay-Knit on Ravelry. She almost cried when I asked permission to post about her. She’s so cute! 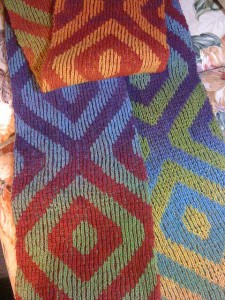 There seriously hasn’t been a project Colleen’s brought to knitting group that I didn’t wish I could make. I basically want all my knitting to be like hers someday. I also basically want to sneak into her house and steal all of her entrelac projects. =D

Can you really blame me? Can you? Her project page is full of awesome like the ones I’m using in this post, and she just pumps out the projects, too. I mean, she does have some long term projects, but it seems like the ones that take longer are because she sets them down to work on other things for a bit, and she also makes less-complicated projects.

But what Colleen’s known for in the group knitting-wise is bringing in WIPs and FOs  that make the rest of us goggle at her enviously for being brave enough to try the pattern (a recent example is the Color on Color scarf).  I hope someday I can inspire someone the way she inspires me. I definitely didn’t start queuing entrelac until I met her and saw her shawls and scarves! And now when I finally start one of those projects, Colleen will know it’s because of her!

Leave a Reply to Sarah - Crafts From The Cwtch Cancel reply